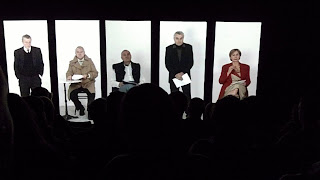 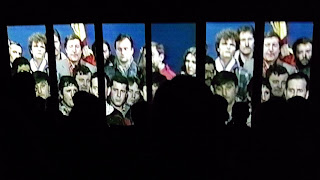 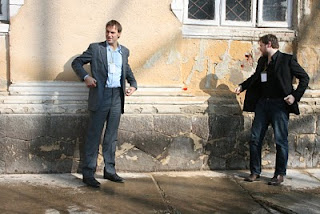 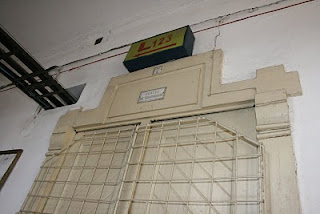 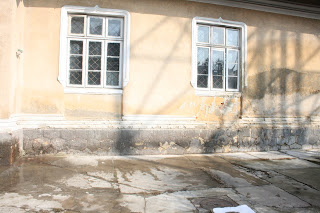 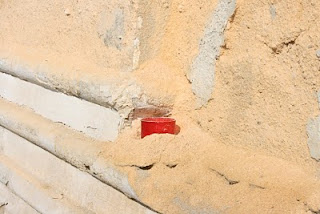 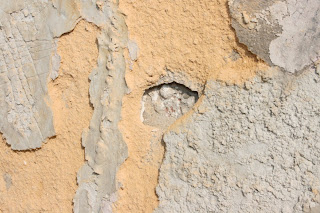 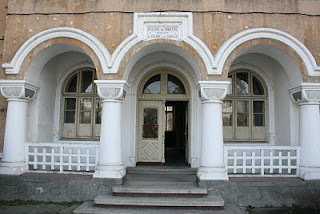 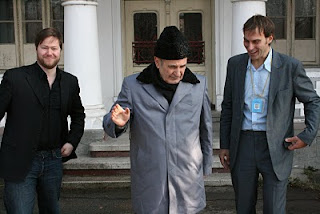 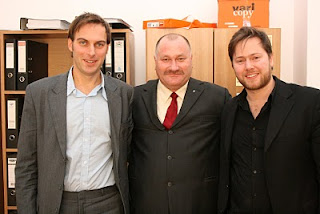 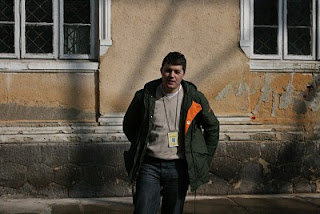 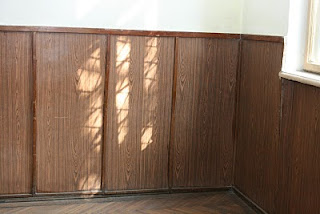 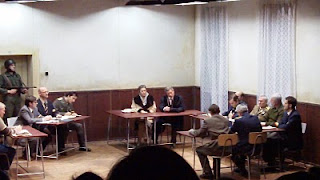 1. I executed a motion picture[1], 52 min. long, which contains interviews with subjects present in USQ, as well as analysis and comments of certain specialists in different fields.

2. After execution, the movie was projected within several public debates were more than 500 subjects attended. The debates were registered, and then the data were analyzed and included in the final study. As a consequence, the movie became a research instrument; more precisely – after the projection of the documentary, the debates were on the key concepts of the research.

By means of the motion picture executed during the research, I tried to take a photograph of the present, of the „reality” of this space. Many times, people see in television how politicians argue over the Square. I saw a lot of meetings and protests in the square, I heard Steaua supporters enjoy a game all night at University, or students sitting around the fountain and reading a book.... however, out of all these images, some are themselves „memorial places” – the image of the Revolution and the image in which the miners come and beat the intellectuals. Precisely for this reason I avoided to put these images in the movie because they have always been present in the memory of those interviewed in the movie or of the subjects who saw the documentary.

The first monument of this kind was destroyed immediately after the coming of the miners in June ‘90. The one erected today in the Square is a recent one, after 1998. On the marker it is written with large and black characters: „ROMANIA, KM 0, BUCHAREST, University Square, LIBERTY, DEMOCRACY, NEO-COMMUNISM-FREE AREA”. These words are, in a way, the key words for describing the events of 1989. On the base, it is painted the national flag of , with the seal cut out, a very strong visual symbol for collective memory.

„This is the place of protest. It has been created and it is strongly tied to the idea of dissent. Obviously, has its symbolic places, but what had ensued in made of these events a national cause. I do believe that for the people this is the place of freedom. Actually “kilometer 0 of freedom” is another name of this place. This idea went very well into the minds of people and it has been perpetuated as a legacy even to those who didn’t take part in the events and denigrated them at that time. This is the place where you can talk freely about your grievances. Furthermore, there is the place where it is relatively foreseeable that someone will acknowledge you...” (M. Miroiu, movie interview).

From the perspective of the discourse that eliminates the sacred element, the same territory is described as „waste land" or „rag-fair", as „a kind of fortified town of Mecca" where space is physically and spiritually destroyed through profane manifestations: „The listeners sitting down continue to eat pumpkin seeds and to sit on the road, like during a picnic. In fact, they even have flowers around, even if they stepped over them when, in the middle of the flower-bed, installed their sign..." (Adevărul, 24.04).

After the army and the „terrorists” fired on the demonstrants, large groups of people came to the square and brought with them: candles, coins and newspaper articles in which there were described the events occurred in the dreadful day over numerous traces of blood, coagulated, remained after the terrible night of December 21st, 1989 – symbol of the sacrifice of the youngsters. The number of victims is not known accurately; some sources speak of more than 1000 dead and other several thousand injured.

Every day there were meetings; speeches of the new voices of civil society were heard.

„I remember very well the balcony of the University. Precisely, the balcony from the Faculty of Geology. From that place persons that slowly become public figures took the floor. It is the place that gave naissance to the first public persons of . And the last picture had been taken at the corner of the Faculty of Architecture. The analogy between Tien An Men and the is not singular. In fact, from December 21st onwards, the was a place of systematic repression. Unfortunately. The meaning of Tien an Men was very important for us. Tien An Men is the cruelty against students, against the willing of change and against the spirit of this student revolt. We shouldn’t forget that we missed the European May ‘68. Somehow, we have combined the anti-communist revolution with the spirit of May ’68 representing the marginal revolts of young people” (M. Miroiu, movie interview).

The miners’ actions (in original, Mineriadele)[3]: June 13th-15th, the miners come to Bucharest; destroy the „City of Freedom”, cruelly beat the demonstrants, destroy the tents where they were staying and plant flowers on those spots. The President of the time, Ion Iliescu, thanks them upon their leaving, for the „ civic spirit they showed”. The number of victims rises to more than 700.

The local authorities do nothing to build a museum in this place; even more, they tried to wipe out all traces of the past.

Researching this past-present phenomenon is very difficult and sometimes unrealizable for several reasons. Firstly, each subject has a personal, individual story and has nothing in common with the others, except for certain major elements – such as the events we have already spoken about. Everyone remembers something else; each subject speaks differently about that common point. Each subject has a are o longer or shorter story, depending on other uncontrollable variables and depending on time and space he will tell you the same story with another ending - memory is always a current phenomenon, a living link of the eternal present; history, a representation of the past (Nora, 1984; p. XIX).

To research memory or oblivion, nostalgia or the myths of the past or present period, one needs more than an anthropological research. But in order to find km 0 of these phenomena such as memory, oblivion, the past, the present, one requires a series of testimonies, several subjective realities, and if these subjective realities overlap at any given point – one can find an objective reality – but, unfortunately or fortunately, this objective reality is merely a photograph at moment x, made with camera y, in place z. The place is what interests us – and exactly how did the subjects relate to it, what they remember about it and the phenomena that occurred there. That place has a continuous significance – as long as the subjects assign it that significance. The , as shown in this paper, has several meanings, but one is common in all interviews – km 0...

[1] The terrain work was performed in collaboration with Mirel Bănică, PhD, prior research and the analysis at hand is individual work; http://filmandmemorii.blogspot.com/2008/03/postez-o-prezentare-celui-mai-recent.html

[2] Analysis of the debates around the motion picture.